Please – no volleying or grunting 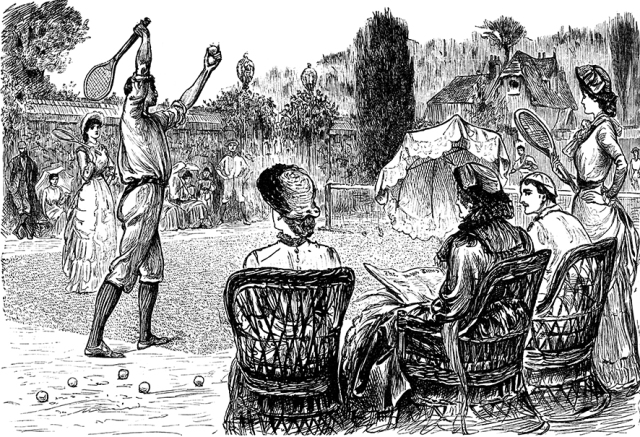 This illustration from our Victorian Picture Library (www.victorianpicturelibrary.com) shows a tennis tournament in late Victorian times. A mixed doubles match is underway. The ladies are at a considerable disadvantage with their long, billowing dresses and broad-brimmed hats.

Before tennis became popular only the well-to-do young woman could enjoy herself in mixed-sex sports, by following the traditional upper-class recreations like hunting and riding. Women from the rising commercial classes were at a distinct disadvantage. Tennis, however, offered them a unique opportunity to discover new circles of friends, as well as meet suitable young men in sedate doubles matches. By Edwardian times tennis was a must at garden parties.

Tactics would have favoured today’s base-line players: it was considered very bad form to dash to the net and volley or smash. Lobbing was unheard-of, and the ball was to be patted gently back and forth.

Ladies were allowed to serve under¬arm: if they had made any attempt at over-arm serving they would have knocked off their hats. The tennis authorities had suggested that the ball should be allowed to bounce twice to give the ladies time to get about the court, but the idea was rejected.

The game was very different from today, with all the grunting, swearing and objecting that are a regular feature of Wimbledon.

I am a writer and designer. I live in Nether Stowey, which is on the borders of the Quantock hills. I am a committee member of the Friends of Coleridge, and wrote and designed the booklet/visitor guide for the National Trust’s Coleridge Cottage. I look after the website for the Friends (www.friendsofcoleridge.com). My novel about Siamese twins titled ‘Riven is now on Kindle. It can be read with a free downloaded Kindle app for an iPad, smartphone, tablet, or computer. The book is available from Amazon. What’s it about? Brief blurb below: It is the story of the Victorian painter Thomas Tait Genoa and his desperate flight through the West Country to save his conjoined twin daughters from the surgeon’s knife. This was before the era of anaesthetics. A 5-start bAmazon review: 'A masterpiece, truly deserving of the five star rating I have given it. The very human experience described so eloquently could not fail to tug at the heart of any parent who has ever gazed on a poorly child in the dark hours of the night and anguished over what to do for the best. This novel might be set in a very particular time and space but the heartfelt emotions of the protagonists are timeless, I have no hesitation in recommending this wonderful work to anyone who has a heart.
View all posts by Terence Sackett →
This entry was posted in Uncategorized. Bookmark the permalink.