In pursuit of Wordsworth 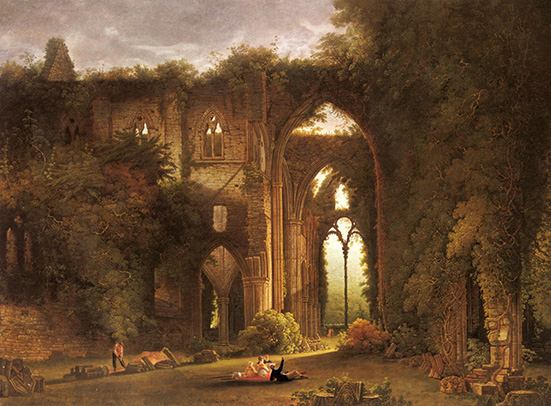 I visited Tintern again recently. I looked at the abbey ruins, but the real reason I went was because I had been re-reading Wordsworth’s ‘Tintern Abbey’. For me it is a potent evocation of spirit of place. I first read the poem when I was very young and it still speaks to me.

As I wandered the ruins I imagined Wordsworth and his sister Dorothy standing alongside me, giving themselves over to a powerful experience of the Sublime. Ruins were sources of inspiration to the Romantic poets, and inspired by the teachings of Rousseau they deliberately sought out wild landscapes and ecclesiastical ruins.

The ruins of Tintern abbey have been structurally secured and spruced up by Cadw. Much of this work is vital for interpretation and health and safety reasons, but I’m afraid for me the abbey ‘experience’ failed and the ruins were devoid of atmosphere and life. Wordsworth would have experienced them very differently when he visited. Remote, hemmed in by the heavy woods around the Wye, they would have been deeply atmospheric, with ivy smothering the toppling masonry.

Both incarnations, though, conjure false pictures of antiquity. Medieval buildings were miracles of architectural vision and fine craftsmanship, and the abbey the monks knew was a new build, its stone work brightly painted and decorated.

I failed to find Wordsworth at the abbey. I couldn’t find him in the shop either, which ignored literary influences, its books and leaflets preoccupied with the building’s historical and archaeological significance.

I shouldn’t have been surprised: reading the poem again back at home I see that Wordsworth doesn’t mention the abbey at all. In fact it wasn’t written at Tintern but ‘composed a few miles above Tintern Abbey’ during a walk in 1798 along the River Wye. Wordsworth’s sights were set firmly upstream on settlements alongside the Wye, with their simple ‘plots of cottage-ground’ and ‘orchard-tufts’. He and Dorothy must have passed through the village, but had they been smitten by the Sublime at the abbey ruins their experience would surely have been recorded in the poem.

In pursuing poets into antiquity are we hankering in vain after fragments of ancient Gothic? Was I chasing shadows? Was it Wordsworth’s Tintern I visited or somewhere completely different? Was the poet still there to track down? I doubt he would recognize Tintern if he saw it today with its chocolate box cottages and proliferation of cafes and gift shops. No longer remote, it’s now a short drive from Chepstow and the M4 motorway. I came away disappointed.

I’m wondering how much restoration and change a building or place can take before it stops being what it was. Maybe it’s like the ship Theseus sailed home in from Crete. Repaired repeatedly, in the end there wasn’t much left of the original. Was it still the same ship or an entirely different one? It’s likely Theseus would have gone it by without a second glance. Possibly it’s the same with Wordsworth’s Tintern.

In pursuing poets into the past we make the error of looking back in time to experience the ‘old’. Wordsworth, to the contrary, was preoccupied with life in the present and had a passion for experiencing the ‘new’. Isn’t it this unstinting and courageous engagement with change and innovation that made the Romantic poets the visionaries we admire so much today?

I suspect that visiting sites with literary associations is never a satisfactory way of tracking down writers and poets. Nor if we seek out locks of their hair or gobbets of their ear wax. Think of the leather-bound volumes we pore through, their covers worn and their spines torn. In the poets’ time these same books were fresh off the presses. Wearing white gloves we gingerly handle poets’ manuscripts and letters as if they are icons, with the magical power to whisk us back in time. We may feel a frisson, but it is surely no more than that.

Maybe it is better to stick to the text. Is a poem any different if we read it in a Penguin paperback or a leather-bound first edition? It shouldn’t be (yet I confess I have just bought an 1803 edition of Robert Bloomfield’s ‘The Farmer’s Boy’, complete with a set of Bewick-style engravings. We never learn).

We can blame a lot of it on the current obsession with reading biographies. We plough through 500-page volumes revealing the most intimate biographical details about our favourite writers’ lives. Somehow we believe that if we know about a writer’s sexual preferences, and where he slept and if he smoked a pipe, it will bring us more penetrating insights into his poetry. I am not so sure. Would it not be healthier if we stuck to the text, allowing the words themselves to speak to us, as the poet intended?

Heritage bodies tend to treat writers’ houses in a similar fashion. Stylists and decorators are let loose, introducing bought-in period furniture and Farrow and Ball paints. The result is too often artifice, a false confection. Maybe writers’ houses should simply be left empty. This at least would allow us to let our imaginations loose.

I am a writer and designer. I live in Nether Stowey, which is on the borders of the Quantock hills. I am a committee member of the Friends of Coleridge, and wrote and designed the booklet/visitor guide for the National Trust’s Coleridge Cottage. I look after the website for the Friends (www.friendsofcoleridge.com). My novel about Siamese twins titled ‘Riven is now on Kindle. It can be read with a free downloaded Kindle app for an iPad, smartphone, tablet, or computer. The book is available from Amazon. What’s it about? Brief blurb below: It is the story of the Victorian painter Thomas Tait Genoa and his desperate flight through the West Country to save his conjoined twin daughters from the surgeon’s knife. This was before the era of anaesthetics. A 5-start bAmazon review: 'A masterpiece, truly deserving of the five star rating I have given it. The very human experience described so eloquently could not fail to tug at the heart of any parent who has ever gazed on a poorly child in the dark hours of the night and anguished over what to do for the best. This novel might be set in a very particular time and space but the heartfelt emotions of the protagonists are timeless, I have no hesitation in recommending this wonderful work to anyone who has a heart.
View all posts by Terence Sackett →
This entry was posted in Uncategorized. Bookmark the permalink.